WILL INMAN, ONE OF NC'S OWN, HAS DIED 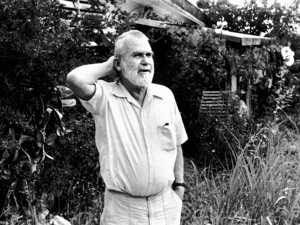 Jeffery Beam has written me of Will Inman's death. Beam and Inman had corresponded for years, and Jeffery had published Inman's work in Oyster Boy Review:

The Wilmington, NC born, Duke University educated (his papers are there), and Tucson, AZ beloved poet recently died after a long illness. Although it had been a long time since he lived in North Carolina, Carolinian's should acknowledge him as one of the most individual, socially conscious, and widely acknowldeged poets to have come from our state.
The Arizona Star published an obituary that gives readers a sense of who Inman was and what he accomplished as a poet and activist:
"Over six decades, Inman committed to paper words both tender and nurturing, as well as thought-provoking and spiritual. Yet it was pragmatism more so than poetry that infused his final prose — the obituary he penned for himself earlier this year. Inman died Saturday after a long struggle with Parkinson's disease. He was 86.

Inman, born William Archibald McGirt Jr. in Wilmington, N.C., began writing and publishing in the mid-1950s, using his mother's maiden name. In his autobiography, "Memoirs of an Activist Poet," Inman reflected on his diverse experiences: growing up in the South, seeing racism firsthand; his activities as a union organizer and a member of the Communist Party; working as a writer, editor, publisher and teacher; and candid reminiscences of his college experiences and his bisexuality.

Inman earned a bachelor's degree in English from Duke University. He taught at Montgomery College in Maryland and at American University in Washington, D.C., where he was poet in residence. "
To read the complete article, please go to http://www.azstarnet.com/allheadlines/311993


Inman's work is fascinating, well worth total immersion. Please take this opportunity to get to know more about Will Inman. To read some of Inman's work published in Oyster Boy Review, here are the links:

Look forward to checking out his work, and thanks for linking to the Poetry Hickory event :)

Please let me know if you ever need something videoed. I'm an amateur at it but free.

I'm glad to see this evidence that Will's work is still getting through. With Michael Rattee & Judy Ray I've had the privilege of editing his books, Surfings, Leaps of Hope and Fury, and I Love You Green, Mother. Will's last wish regarding his work was that his once censored Memoirs of an Activist Poet be published, and Minotaur Magazine will now be serializing it. There will also be a memorial celebration of his life and work at the U.A.Poetry Center from 2-4 on November lst. One correction: though he does have an archive at Duke University, another major collection is at UNC-Wilmington library. I hope that scholars, critics, biographers, and others will be exploring the work there, for there is much unpublished, including fiction that will remind some readers of Thomas Wolfe. As poet, activist, friend, and mentor Will will be remembered fondly by all who knew him. He once told me that though he was an atheist he believed in God every time the St. Matthew Passion was played, whereupon another friend suggested that we make a tape loop with that work so he could believe in God all the time. He was also more than irritated when a copy editor changed "god" to "God" in one of his poems. In any case, his work is suffused with love of nature and all things good about humanity, but he was also unstinting about his activism, and proud that he had been a C.P. member back when it was costly to artists of any medium or persuasion. Along with Denise Levertov, Allen Ginsberg, Grace Paley, et al., he was on the frontlines, ever vocal against war and every form of bigotry.
David Ray
www.davidraypoet.com