Four years ago Fred Chappell sent me a beautiful broadside of The Foreseeing, telling me that it was a new kind of poem he was now exploring, the "embedded poem," or a poem within a poem, and that it was devilishly difficult. In this poem, the voice of the woman is embedded in that of her partner, who is beginning to realize that she is in love again. The two voices work with and against each other, forming a whole. Call it poetic counterpoint. The "inlaid" poem. Better yet, call it stunning, an enviable achievement. 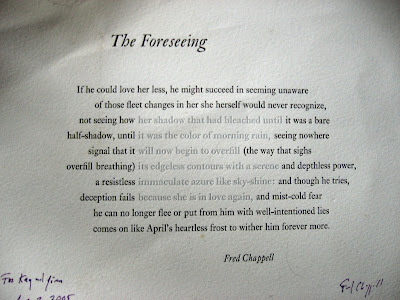 Now these poems, at which Fred has been working since The Foreseeing, have been gathered into a new collection from LSU Press: its title appropriately enough is SHADOW BOX. Last night, August 7, at City Lights Books in Sylva, NC Fred read from SHADOW BOX, with his wife Susan presenting the woman's voice in the poems. The two of them gave a haunting, at times beguiling, performance. 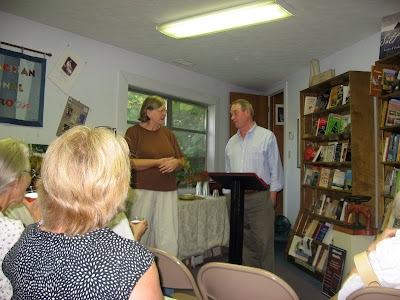 (Joyce Moore introduces Fred to the audience in the bookstore's Regional Room.) 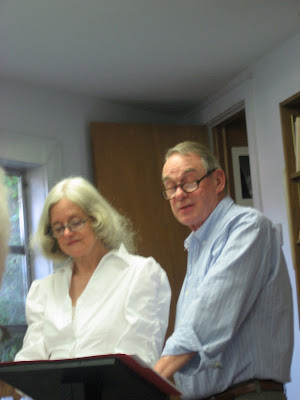 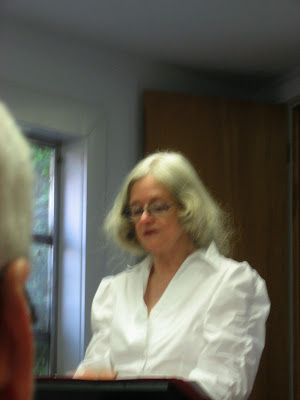 Spotlight
The hamlet sleeps under November stars.
Only the page of numerate thought toils through
The darkness, shines on the table where, askew
And calm, the scholar's lamp burns bright and scars
The silence, sending through the slot, the bars
And angles of his window square, a true
Clean ray, a shaft of patient light, its purview
Lonely and remote as the glow of Mars. 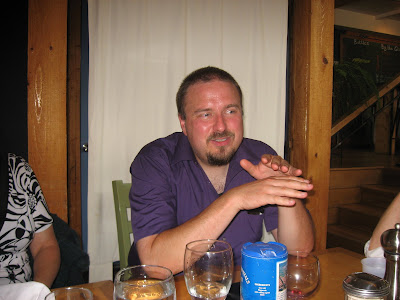 Brian's wife, the poet Catherine Carter, gets acquainted with Dana Wildsmith, who drove several hours from Georgia to be with Fred and Susan. Catherine's first book, The Memory of Gills, won the Roanoke-Chowan Award two years ago and was highly praised by none other than---Fred Chappell. 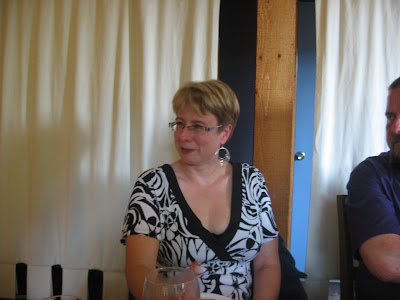 Dana Wildsmith, a long-time friend of the Chappell's, has published several collections of poetry, as well as numerous essays, the most recent being in The Sun, published out of Chapel Hill. She lives in Bethlehem, Georgia. 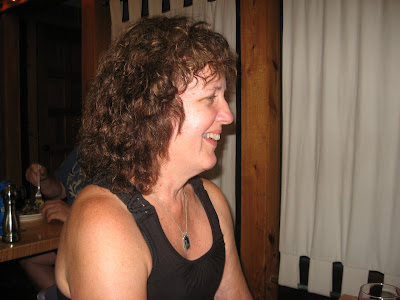 Fred will be on hand for the NC Literary Festival in Chapel Hill in September, as well as at the Smoky Mountain Bookfair in November, to name just a few opportunities for hearing him and Susan read from his new book. This new collection by the author Lee Smith calls our "resident genius," deserves all the readers it can get!

What an amazing event! I just love Fred :)

I remember him talking about these embedded poems at the NCWN spring conference a few years back.

A poet I know from Poetic Asides, Nancy Posey, led me here and I can't thank her enough. Shadow Boxes are inspired and Fred Chappelle simply brilliant - I look forward to reading more and eventually owning the book ...