YOUNG AND RIPE, by Ann Campanella 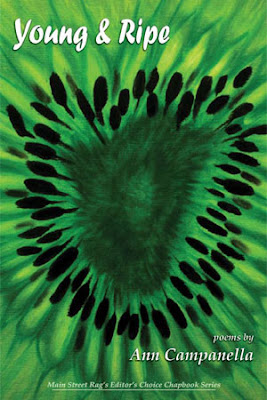 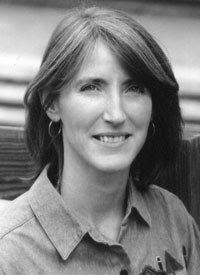 After Christmas I received an email from Ann Campanella about her new work. She had made some generous comments about my own poetry and its love of place, something she had felt she lacked when growing up. "As a child of a military family, my love of place was often interrupted and penetrated by loss," Ann wrote. "But, as I grow older, I realize that loss is woven into everyone’s landscape as isjoy. I have recently completed a chapbook of poems, Young & Ripe, which draws from my early years. It has been selected for publication by Main Street Rag after being a finalist in last year’s chapbook contest. I’ve been honored to have Tony Abbott, and Janice Fuller read and comment on thecollection. Because the book is about a young woman’s journey to adulthood, I’mparticularly interested in the female perspective."

Ann asked if I would like to see some of this work, and of course I said Yes. I'm glad I did. Several selections from this new book are collected below Ann's author's biography.

Ann Campanella was formerly a magazine and newspaper editor. She turned to creative writing in order to nourish her soul. Twice, she has received the Poet Laureate Award, the highest honor of the North Carolina Poetry Society. Her poetry was selected for the Blumenthal Readers & Writers Series by the North Carolina Writers’ Network. Her writing, nominated for a Pushcart Prize by Main Street Rag, has appeared in local and national publications and anthologies including Chelsea, Crucible, Earth and Soul, Iodine Poetry Journal, Iris, Kakalak, Pembroke, Southern Poetry Review, Tar River Poetry and many others. Campanella has a degree in English Literature from Davidson College in North Carolina and lives with her husband, daughter and animals on a small horse farm in Huntersville, North Carolina.

The Point of Impact

After the move to Panama, we sought refuge
from black army ants and poisonous frogs,
huge mosquito trucks that sprayed a tent
of lethal fog around the housing.

Under a violet sky, you took up beer and dope,
sat under the umbrella palms with a hand
on the thigh of your army brat girlfriend.
I hated how she came between us.

She was the one caught with you in the first storm
of the season. It became a legend on the base,
the way the rain fell like rocks
on the hood of the Mach I as it skidded,

then flipped off the edge of the bridge.
Your seat-belted bodies swung upside down
like two bats in the drainage ditch.
A year later, she left you

after your best friend leapt
from the center of that same bridge.
His body compressed at the point of impact
as if it never had space for a heart.

You pushed me away. I wanted to comfort you
the way your hand-me-down clothes had comforted me.
I tried to follow as you hacked paths in the sawgrass
with your machete, wretched among the papaya.

Back in the States, as adults, you tell me
she left him for you, (the way you left me for her).
I say, It’s not your fault. We talk about the iguanas
that crawled through our back yard,

the metallic frog sounds that made us shiver
in the dense air, and how every morning
we’d step wide on the road
to avoid their flattened bodies.

We took off for Ft. Worth
in the middle of the term,
drove along I-4 smoking clove cigarettes,
woozy with freedom.
Texas represented space – a place
where your mother’s worries couldn’t reach you
except by mail; she sent clippings you read out loud
as I pressed the accelerator: Teenagers Overdose
on Drugs, College Student Falls Asleep at the Wheel.

For a month we lived on top of a barn,
woke to faint neighs below.
We ate bear claws for breakfast
and mucked out stalls, rode expensive horses
for the kids who drove their parents’ Mercedes.
Your mother called nightly. Afterwards,
we put on clean jeans, navigated slick streets
to Western bars where we danced
with men in cowboy hats and snakeskin
boots. I looked after you
when your mother couldn’t.

When the job was over we kept driving west.
At night we cranked back vinyl seats
to sleep in state parks near trails
that led to places like Cat Scratch Canyon
and Suicide Ridge. At phone booths,
you soothed your mother.
We slipped away before the sun rose
and the ranger made his rounds.

When we reached the Pacific,
there was nothing left to do
so we followed the Grateful Dead.
We sold roses in the parking lot.
The band played St. Stephen
while fans traded tie-dyed shirts for weed.
Our sandals slapped against asphalt
as we wound through cars. Music spilled
from multi-colored vans where teenagers
crouched around wooden pipes,
blue-grey smoke spiraling
over their heads.
We were happy.

Years later, after we came home
and your mother endured cancer,
I drove to your family’s beach house.
As the door swung closed, your mother
waved her arm over the one breast still intact,
Don’t forget your sunscreen!
You flashed a brown plastic bottle
to relieve her. Outside, I read the label –

SPF - 2. Under the white hot face
of the sun, we walked for miles,
talked of the days when we were free.
Sand scrubbed layers of dead skin
from our heels and the tide receded,
leaving sharp bits of shells
like your mother’s words
strewn along the beach.

I drove to the clinic in my mother’s
Volkswagen, a bloated yellow womb, never
breathed a word, simply called my collie,
his golden mane shining
as he jumped on the seat
beside me. I parked in the shade.

It was an October day,
cooler than most along the Carolina coast.
I rolled the windows down so my dog’s long nose
could inhale the sea. I held everything close,
my body a drawstring bag
that would spill
its precious gift
under the sun lamps
of the doctor’s office.

Afterwards,
I stepped outside into the sharp
light, sky a blue vacuum,
bent oaks along the road
emptying themselves of leaves,
pointed tips of grass mown flat.
I buried myself
in my collie’s fur.

Six Days on the Road


When I was young and searching for my life,
I climbed into the cab of a semi.
The Aussie trucker pointed with his thumb
to the compartment behind him.
Get some sleep. I don’t remember
if he was old or young.
His face was so plain
it left no impression.

I climbed into the narrow space,
closed my eyes, my body vibrating
to the hum of eighteen rolling tires.
Hours later, when I woke, the dashboard
glowed like a field of lightning bugs.
I flipped through his eight-tracks,
surprised to find familiar songs – Johnny Cash and Waylon.
We sang Six Days on the Road,
over and over.

He taught me what it’s like to keep moving.
Towns flew by our windows,
stoplights, billboards, traffic signs
became a blur. On the open road,
miles of white line and fence
separated gravel from the grass.

In the darkness, rain dove at the windshield,
headlights carved a tunnel through the night.
He never laid a hand on me
even though I was young and ripe
and unattached to my future.
There was safety in
that metal womb.

I’m older now. My life is settled.
But sometimes I wake at night,
blood roaring in my ears,
hair mussed from the wind
of a semi passing by.


I carry her in a small papoose
just above my breast bone,
some days she rides lightly
as if she is made of air,
other days I can hardly breathe
for the way she presses into me.
It is those days where I try hard
to pretend she is not real,
that what I did so long ago
has not attached itself to me
and ridden in this sticky, messy way
all these years.
It is hard to see this in myself –
how much I hide,
how blind I am
to what is right in front of me.
I’d like to lift this small thing
out of its pouch, hold
her to the light, caress
her with my eyes, allow her to grow
into what she was meant to be.
But a shaft of light
brings a sudden awareness.
She can never be anything
as long as she is hidden,
and yet I fear
when she comes into being
she will shadow everything I am.
So I must be bold,
allow her to stretch her tiny wings –
such gossamer, such beauty.
If she can catch the wind, she will fly,
lifting me with her.
Posted by Kathryn Stripling Byer at 9:21 AM