POET OF THE WEEK: JASON KOO 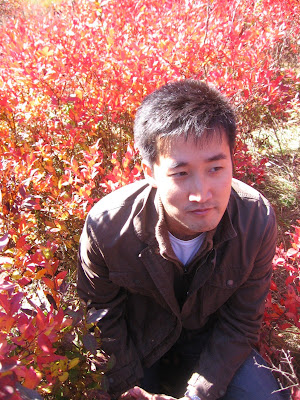 I met Jason Koo the day before Election Day at Davidson College where he teaches. At the Chinese restaurant where we had lunch with Tony Abbot, we both decided on General Tso's chicken (well, it's spelled differently in various menus), so I knew we'd hit it off, which we did. I was there for the Appalachain Songbook performance with soprano Jacque Culpepper and pianist Phillip Bush, but I also agreed to visit Jason's poetry workshop. A great group, and Jason himself had the enviable teacher's persona of being both laid-back and incisive. I asked him to send me some work for my blog and our website, so here is his "official" bio. statement, but first a short piece from his email telling me his good news!

".....the night before Election Day I found out I won an NEA for the upcoming year. Amazing news-first time I've ever really WON anything for my poetry. It had been a life of second place and honorable mentions (which, as a Clevelander, seemed fitting). And the crazy thing was, I wouldn't have picked up the phone call had Dana Gioia (the NEA rep) not been calling from a Washington, DC number-I figured it had something to do with the election. Once I found out the news I knew there was good energy brewing in Washington."

Jason Koo’s first collection of poems, MAN ON EXTREMELY SMALL ISLAND , won the 2008 De Novo Poetry Prize and will be published in 2009 by C&R Press. The recipient of a Creative Writing Fellowship from the National Endowment for the Arts, he has had his poems appear in numerous journals, including The Yale Review, North American Review, Verse, Bellingham Review, Cimarron Review, Green Mountains Review, and Gulf Coast. He serves as Poetry Editor of Low Rent and is a visiting assistant professor of English at Davidson College.

The good news about the NEA fellowship and his first book being chosen for publication came during the month of December! What great Christmas gifts!

Here are two of his poems. Both have been published before, the first in LYRIC, the second in GREEN MOUNTAINS REVIEW,.
Other poems may be found at KARTIKA REVIEW () "There Is No There There," and "Man On an Extremely Small Island," at VERSE (http://versemag.blogspot.com/2005/07/new-jason-koo-poem.html).

Look for more about Jason on our Spring Writers & Books site at ncarts.org in a couple of months.

POEM WITH A HIPPO IN IT


Are you an idea? Or are you everything?
Love, I know I fall short of everything.
On the checklist of everything, I do not
include a country club membership,
soccer memorabilia, or the all-important
Caucasian Executive punch card.
I do come equipped with golf clubs
and a tee, but am missing the genteel spikes
and sticky left-hand glove that cinch
the look favored in Everything Magazine.
Well, at least you get the magazine, you say,
but it costs me a fortune, arriving
every second of every day as it does.
The subscription has completely
decimated my pile of spare change
(which I was saving for you), not to mention
rendering moot my magazine rack.
Can I offer you this double-handful
of ticket stubs? It comprises a sprawling
autobaseballconcertfilmography
of my past seven years, which isn’t everything,
but that’s better than two. And the years
before, I was in Everything Training,
which is to say, face to face with the Nothing,
who made me do time tables all night
and liked to hit me with a back scratcher.

How could I possibly know
you were coming? In my Morning Workbook,
which consisted entirely of Heidegger
and Emily Dickinson quotes (and which
my master affectionately called
“The Opening of the Pain”), I learned,
after long staring, that everything is an idea,
a coat we’re constantly trying to fill out
which always remains huge.
Darling, believe me, I’ve been applying
myself, I’ve been working out
with Kierkegaard, Emerson, Nietzsche,
all the heavy lifters, but look, I’m barely bigger
than you, I haven’t gained five pounds
since high school. The Brain is wider than the Sky,
but the sky is just a thin blue slice
of everything. The sky does not include
porpoises, hippos, and small pouches of candy,
for instance. Have you seen a hippo swim
up close? They’re horrible, ugly, and magnificent.
Hard to believe you can live without them
after that. Have I asked you, even once, are you
everything? I love what’s less

about you, your limitations, your smooth body
running under my hand only is
because it stops

at shoulder, elbow, nipple. Imagine
your body expanding to house the Antarctic Ocean,
all its seals, penguins, chunks of ice,
foundered ships and thermal-underweared explorers…
Sublime, a test of my endurance, surely,
but frigid. I want a coat that fits

as I boot my way against the polar blasts.
The coat may fail me, I the coat,
but we’re more than less than everything
together, we go further, and in the end,
gain a greater idea of our limitless capacity,

see that failure, too, is a part of everything.


I was lying in bed again, after waking again,
After sleeping again, feeling demolished but poised
When nothing occurred to me, nothing
Knocked on the door, nothing came swinging
Into my vision. The phone rang, I heard my voice
Saying I wasn’t here; then staticking silence,
Then silence; then the phone rang again, again
I heard my voice, it sounded exactly the same.
I was trying to read the light in the room, the losses
It took as it passed through the dust-filmed
Blinds, from the leaves of the tree, the tailpipe emissions,
Every morning I wanted it to choose me, order
Me up, but it looked merely left there, on the stapler,
The rows of books, the soft calculator buttons,
It didn’t come down from the heavens, it didn’t
Break into the room like a fresh bull of beginning,
It didn’t, it didn’t, it made that sound, didn’t.
I propped myself on my elbow and made a sail
Between my arm and my chest, but the raft
Of my bed stayed put, no wind came billowing
Across the beige ocean of carpet. Oh when
Did I enter this life of facsimile? The calendar said
May, said Water & Light, but those words lay
Over boxes, boxes and boxes and boxes
I wanted to break apart like ice cubes from a tray.
I saw my Scream pillow in the corner, facsimile
Of Munch’s painting on the front SQUEEZE ME
AND I SCREAM THIS PILLOW DOESN’T JUST SIT THERE
IT EXPRESSES ITSELF But it was just sitting there,
A product, a birthday present, it required a hand
To squeeze it, a will to make the hand squeeze.
Inside the man cupping his face into a lightbulb
Was no great, infinite scream passing through nature
But a little plastic box, and some batteries.

Posted by Kathryn Stripling Byer at 11:27 AM

Jason Koo, I enjoyed reading your poems. Congratulations on your N.E.A.

"I love what's less about you." Amazing line. I love these poems...so fun, accessible, and thoughtful. I'm going to read more of him, certainly! Thanks for sharing this.