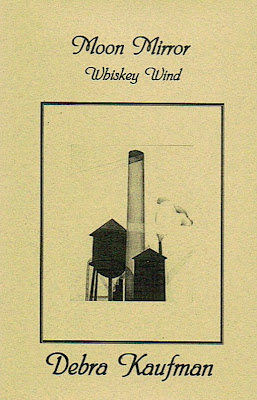 Moon Mirror Whiskey Wind by Debra Kaufman.
Publisher: Pudding House Publications (ISBN 1-58998-770-5)
Price $10. S&H $2.50 for first copy; $1 for each additional two.
To order: go to www.puddinghouse.com and scroll down to “order form” on the left side bar.
You can print the form and send it with your check or credit card information to
Pudding House Publications, 81 Shadymere Lane, Columbus, OH 43213.
Or (faster and easier):
telephone PHP at (614) 986-1881 and leave a message with author name, book title, number of copies, your Visa or MasterCard number w/expiration date, and your mailing address and phone number.


Moon Mirror Whiskey Wind, Debra Kaufman's fourth collection of poems, obliquely tracks the life of a lonely girl steeped in fairy tales who tries to escape her small town's mores and create a new life. Poet and playwright Debra Kaufman is the author of Family of Strangers (Nightshade), Still Life Burning (South Carolina Poetry Society), A Certain Light (Emrys), and Moon Mirror Whiskey Wind (Pudding House). Her poems have appeared in many poetry anthologies and literary magazines, including Pembroke, Room of One’s Own, Virginia Quarterly Review, Greensboro Review, and Carolina Quarterly. Her plays have been performed throughout North Carolina and in California. She is working on a new collection of poetry and a full-length play, The Fairest. Debra grew up in several small towns in the Midwest. She moved to Durham, North Carolina, with her family in 1981 and has lived in Mebane for twenty years. 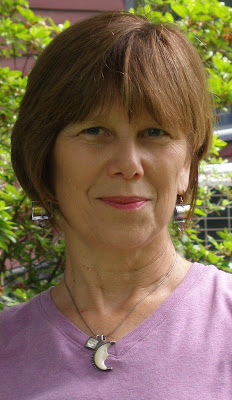 She was a reader
of fashion magazines.
He was a leader
of reckless young men.
Impossible her name should be Destiny.
He was called Johnny, forever.
Her mother said, marry, him, why not,
a wedding, a home, sure, that’s life.
Her father said neither one thing nor another.
She draped herself in layers of scarves,
followed the make-up tips of stars.
The mirror, her friend, suggested one day
you could be one of them.
Johnny wanted only her body,
which she gave as a blessing,
while saving her true self for the future,
which stretched beyond this hick state
of corn and beans, corn and beans
and the smell of shit and terror and rage
that blew in from the hog farms south of town.
To board a bus in Des Moines and head—
where? All she needed
was a godmother who would say,
First thing, kid, go, and go now;
second, know it will be hard;
third, I have a friend
in the city who can help you.

She dresses you in evening gowns,
pushes shoes onto your
achingly arched feet,
bends you at the waist
and forces you into Ken’s car,
Ken’s boat, Ken always
whisking you away.
She moves your arms:
wave hello, better wear your windbreaker.
How tiring to have a pink
smile painted on
over a smear of white teeth,
your eyes, the blue of a chlorine pool,
always open.
Would you be happier alone
in the kitchen with your miniature
stove and tiny, unbreakable cups?
Mmm, this coffee sure tastes good,
she says for you, then strips
you again, rakes the comb
through your coarse, bleached hair,
then drops you in hot sand
under a killer sun;
grit gets in your cracks
while she eats an ice cream cone.
Naked, you wait—pert, expectant—
fated never to be loved for yourself,
but only as the plaything
of this moody little girl
now coming at you
with scissors in her hand.

The Princess with the Brass Heart

The ill winds of March
blew in catbirds and starlings;
the damp drummed up dozens
of mice. She’d find them,
heads bitten off, in the grass
and felt as little pity
as the cats that did the deeds.
Something scratchy
in her voice now.
She painted her toenails
the dull red of dried blood
and started eating meat again.
Television, solitaire,
all the same to her
tarnished heart, dull eyes.
Her borzoi shadowed her,
head down, rib-thin.
Three times she turned away
the slight suitor who might save her,
then slipped into the mirror
where the dark queen reigns.
Posted by Kathryn Stripling Byer at 12:18 PM