POET OF THE WEEK: Shelby Stephenson


Anybody who knows anything at all about NC literature knows who Shelby Stephenson is. He's a force of nature. A one-of-a-kind character. A non-stop poet. A wide-ranging editor. A generous friend to other writers. A musician and singer. A man close to the land, living now on the farm where he was born. Here is his "official" biography on his website.

Shelby Stephenson grew up on a small farm near Benson, in the Coastal Plain of North Carolina. “Most of my poems come out of that background,” he says, “where memory and imagination play on one another. I have written many poems about the mules we worked until I was in the seventh grade and, after that–the tractor. My early teachers were the thirty-five foxhounds my father hunted. The trees and streams, fields, the world of my childhood–all that folklore–those are my subjects.”

In addition to a poetic documentary: Plankhouse (with photographs by Roger Manley), he has published Middle Creek Poems, Carolina Shout!, Finch’s Mash, The Persimmon Tree Carol, Poor People, Greatest Hits, and Fiddledeedee. With his wife Linda he has also made the CD and cassette: Hank Williams Tribute. They live on the farm where he was born.

I can vouch for all these books. They live on the bookshelf devoted to Shelby. I can vouch for the cd, too. My late father liked it a lot. He was a big Hank Williams fan. So am I. Shelby's latest books ia Family Matters:
Homage to July, the Slave Girl
Here is Allen Grossman's endorsement:

“An intense and heart-breaking poetic narrative which, in its exploration of historical and personal materials, holds affinities to the work of Susan Howe and to James Agee’s classic Let Us Now Praise Famous Men. Family Matters is a strenuous questioning — and exposure — of the fictions of ownership, whether of persons or places, graves or farms.”
--Allen Grossman, final judge, 2008 Bellday Prize competition 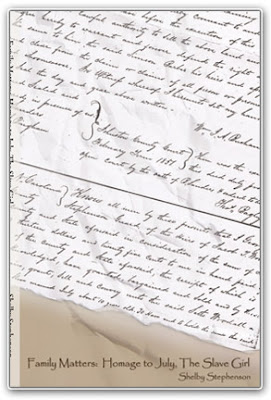 2008. Bellday Books. $14 plus $2 shipping & handling. Available from the publisher at www.belldaybooks.com

Came with his punchboard.
I pushed out numbers for choice prizes.
Once a month the promise went out over the countryside.
The Watkins Products Man, too.
Had a chicken coop tied to his front bumper.
He’d take a chicken as payment, say, for horse lineament.

Did you work to satisfy your credit at Pap’s commissary,
tense up when you entered the store?
Did the farmers there court the drinkstand to give you room?
Did you ever punch a board or trade eggs for pretty things?

I did have a Candy Man.
I did not wish for hair to let down to dry his feet at footwashings.
Sometimes I gave him an eyeful and lost him.
In the fall when colors called my face shadowed his window.
At dusk, the table set with fatback and molasses−his skin twinged until a voice
sang for me alone until the tune went out of hearing.

Mr. Charlie Parrish’s Store loomed way up Paul’s Hill.
I would walk with eggs in my pockets to swap for merchandise,
lean against the colddrinkbox and listen:

Hallo! Heck, I garn-dam-tee
you this: no ragged-assed farmer’ll
get in no field today; tractors’ll
mar up over the mufflers, I tell you−
row a boat in the ditches down yonder by Paul Coats’s sloughs.

Tom’s Roasted Peanuts float in a Pepsi Heck guzzles.
He’s no holier-than-the-learned race of farmers who’ll tell you:
Workworkwork and what do you get?!
Bonier and bonier and sloppy-assed in debt!
Sleeves waving, he lowers himself down the sandy, shackly, wooden steps.

Greatgreatgrandpap George’s grandson−I called him Grandpa William−was born
of Martha Johnson and Manly Stephenson, on the farmof “badlybent”George,
off state road number 1517 in PleasantGrove, Johnston County,North Carolina.
As a boy William hired himself out to Deb Wood to cut wood;
helped his Uncle Naz, mauling and splitting rails
and hauling them home.
He picked cotton,
pulled corn, tended garden, raised goats, too,
hogs aplenty snuffling paths harder when he’d pass with slops for the trough,
slipping in his boots on the hill.
He moved across Middle Creek to Polenta, crossed the creek on a footlog, walked paths
through woods.
One dark night a goat jumped up,
scaring the daylights out of him:
“If the goat had not bleated, I think I would have died.”

July was born ninety-eight years before I was.
Grandpa William was sixtyseven that year−1938.
He split wood for thirty cents a cord.
Got tired of helping Naz maul and haul those gums.
Hunted wild turkeys, rabbits, and squirrels.
Set traps in the swamps, catching anything he could: otter, mink, raccoon−
one hide brought a dollar.
A yea and nay man.
Couldn’t read or write.
Joined the church and started preaching.

You know that families moved in with one another back yonder,
a kind of underpinning: Manly and Martha with William and Nancy.
Martha had a skip she learned in Polenta.
Nancy joined the church in 1910. 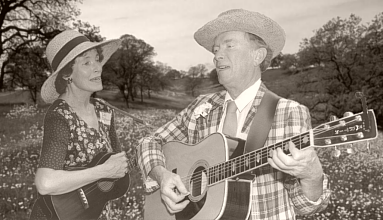 (Linda and Shelby Stephenson, photo by J. Hensley
Posted by Kathryn Stripling Byer at 8:12 AM

I first met Shelby at a playwright's workshop at East Carolina back in the 70's. I also remember him when my play, "Prince of Dark Corners" premiered at WCU in the Mountain Heritage Center. Shelby was in the audience along with some of North Carolina's best writers (a conference hosted by Kay Byer). When "Prince of Dark Corners" made it to PBS, Neal Hutcheson asked Shelby to narrate the film's introduction. Shelby's voice is fantastic...and unmistakable.

Hi Gary, yes, Shelby's voice--indeed all of Shelby--is unmistakable. As is yours!

Dear Kay,
I had the honor of studying poetry under Shelby Stephenson at the John C. Campbell Folk School. He's a terrific teacher and one of my favorite poets. I'm so glad you posted his poetry. I always enjoy reading his work. Besides being an outstanding poet, he and his wife, Linda, are wonderful musicians. There's no one who can give a better poetry reading than Shelby Stephenson.

Shelby Stephenson is an amazing poet. Thank you so much for this.

Thanks for including Shelby on this. I've been lucky enough to hear him and the other Stephensons at the plank house. Family Matters is a really fine book, and Shelby's is an important poetic voice for this state.

I met Shelby at Weymouth years ago when the best possible efforts were needed to save this remarkable place and the legacy bequeathed by James and Katharine Boyd.

A board member for many years, as well as president at one point, he and Linda shared their rich heritage of pickin' and singin' for Carols at Weymouth.

It takes a rare talent to see and write about ordinary people and experiences, but in doing to we all become keenly aware of how much alike we are.