Last year Asheville Wordfest took its inaugural flight. A festival devoted solely to poetry landed in town. Asheville, that is. Two of the guiding spirits, as well as the corporeal organizers, were Laura Hope-Gill and Sebastian Matthews. Now the second landing of Wordfest is about to take place, beginning next Thursday. Go to the Wordfest site for more information, including schedules and list of poets. Headliners include Quincey Troupe and Li-Young Lee, but the roster of lesser-known poets is just as dazzling. 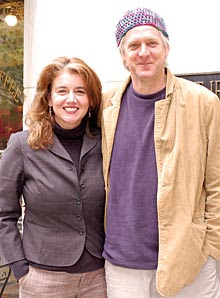 (Asheville WordFest organizers Laura Hope-Gill and Sebastian Matthews are bringing together poets from a variety of traditions. Photo by Anne Fitten Glenn.)

I asked Laura to share her vision of Asheville Wordfest with me. She said that was a dangerous thing to ask! She could talk about it for hours, her hopes for its growth, her reasons for devoting so much of her life and energy to it. What follows is an unexpurgated version of her email to me, interspersed with photos of some of the featured poets.


I think the really important thing to convey about Wordfest is that it is product of many years of Asheville poets' legacy-building. From the early nineties until now, there's been a strong poetry community. (I see it as a healing of what happened to poor Thomas Wolfe whose words won him exile from his city.) James Nave, Glenis Redmond, Bob Falls, Allan Wolf, Keith Flynn and more recently Graham Hackett, Sebastian Matthews, Jeff Davis, and too many more to list, have stoked the fires for a free poetry festival for this town. Back in the early 90's there was a poetry event every weekend evening, in some crazy location, ranging from the Green Door to the Diana Wortham, which back then, like the Green Door, allowed local performers to use the mainstage (!) for a mere 20% of the door. The town came out for these events.

Wordfest was dreamed up at a table at Malaprops, where I think all of us have read at one time or another. James Nave, Jeff Davis, Glenis Redmond and I sat around after a broadcast of Wordplay and up it bubbled. It's interesting that three of us are rooted in the performance scene--we've always had that drive to make poetry public, to literally give it away. That's the spirit of creativity, so we keep that at the heart of Wordfest. Lewis Hyde's book *The Gift* is one of the most important books in my world. In that book, the poet explores the creative economy, one based on circulating energy, rather than trapping it in place. For Whitman, poetry was currency. He spent it generously and in return he received it generously. He devoted hours to writing letters for wounded soldiers. For him, there was no difference between service and poetry. Hyde also studies ancient economies and folktales, revealing that cultures have survived quite well on this circular economy. It's interesting to me that we're witnessing the end of the linear economy (however many bailouts we attempt in order to put off the inevitable). It's a perfect time for creativity to rise, for people to give things away for free, such as a poetry festival, and enjoy seeing how it comes back to them in other forms. So, it's about much more than poetry for me. It's about restoring things to a more natural economy.

We invite local businesses and groups to sponsor poets as way of integrating poetry into the marketplace. For the amount it costs to buy a paper ad in one issue of a magazine, a business or group can actually pay for the poet's airfare and (part of) a reading fee and give much more life to the money, and reach many more people (through our website, press and the actuall event itself) in a much more human way.

Also, WordFest presents poetry as Citizens Journalism. This is simply an emergence from my experience of watching Dr. Maya Angelou on Nightline on September 11. She was talking about how we need to "feel" what has happened, how we need to grieve, and Ted Koppel said, "Well, thank you for that poetic reflection, Dr. Angelou. And now for a more realistic perspective." And gone was the poet and up came a general or colonel. That was it. Neither of those perspectives is more realistic than the other. There are two realities--the active and the reflective. Asheville Wordfest, by presenting poetry as Citizens Journalism, explores this.

We are funded by the North Carolina Arts Council and the North Humanities Council, two amazing examples of circular economy in the way they return taxpayers money to the taxpayer in a higher form, that of art. My own company, The Healing Seed, picks up the rest of the tab along with Amy Mandel, Shiner Antiorio, Katina Rodis, Laurie Masterton, Grateful Steps Press, Maggie Wynne and many other members of our community. As the years continue, I envision more businesses and friends will "sponsor-a-poet" by donating money. It can happen, We can change the economy into a creative one, and see how everyone benefits. Asheville Wordfest is one model for doing this.
Posted by Kathryn Stripling Byer at 12:47 PM