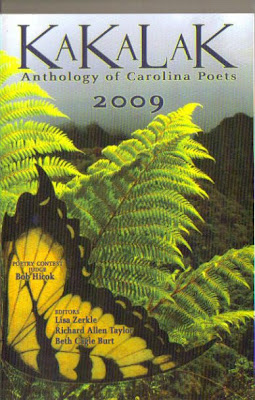 KAKALAK 2009, Anthology of Carolina poets, flaunts one of the most beautiful covers I've seen in a good while. Edited by Lisa Zerkle, Richard Allen Taylor, and Geth Cagle Burt, it has become a yearly tradition of Carolina poets gathered between handsome book covers. Yes, it awards yearly prizes for poetry and art, and it has special portfolios of poets' work. I've chosen some poems and images from the book that I myself like, a subjective gathering. I hope they will give you a taste of what the entire issue is like. Sharon Sharp's photographs of windows captured my attention right away. Sharon is, as most of you know, also a fine poet. KAKALAK may be further tracked and ordered from http://www.kakalak.net/. The anthology's poets have been giving readings around the Carolina's, so keep your eye out for any Kakalak folks scheduled to present their poetry in your area.

I begin with a poem by Susan Lefler, one that resonates strongly at this stage of my life as my husband and I worry over aging parents. Lefler lives in Brevard, NC and writes for Smoky Mountain Living. She has workshopped with Cathy Smith Bowers and is active in the WNC poetry scene.

Climbing an abandoned stair, plunging
into empty air—cerebellar atrophy they call it.
My father lives in a nursing home nearby.
I live in the midst of a whirlwind:
fall after fall and I am called to fix it.

Who hangs from rocks on ropes,
I ask myself, who dangles in mid-air,
lashes themselves to peaks, slices
into rock to access clouds? Who knows
the way to hold the weight of a man,
to break his fall and how to lower
him past canyon and crevasse to solid ground?

I head to the outfitters at the edge of town.
“I want to hang something,” I say,
entranced with ropes in every color, pulleys,
belts and carabiners glittering from hooks,
daisy loops of web guaranteed, I’m told,
to hold 4000 pounds. “What do you want
to hang?” the young man behind the desk
inquires. “My 91 year old father,” I say firmly.
“What do you want to hang him from?” he asks,
being a man who knows what it is to hang
from a cliff for no particular reason. “From
the bathroom ceiling,” I tell him.

We devise a plan: five carabiners (red)
two mountain daisies with a simple lock, a silky
piece of web, eye hooks in the ceiling…
it just might work. My father was a pilot
after all. He knows harnesses and parachutes
and easy landings. He knows wings.
He knows what it is
to find your way homeward in the dark.

Whenever I open a magazine and see Mark Smith Soto's name in the table of contents, I turn to his poem right away. You can click on this image to make it larger. I apologize for the quality of the page reproduction. 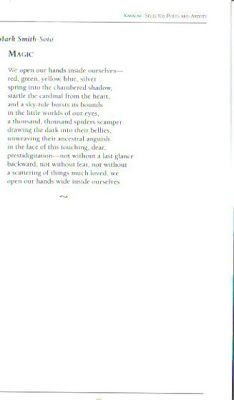 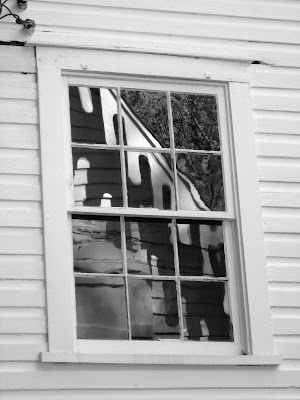 Kimberly Glanzman was second place winner in the Kakalak awards that this year were judged by Bob Hickok. She is a student in Charlotte's Queens University's MFA program. 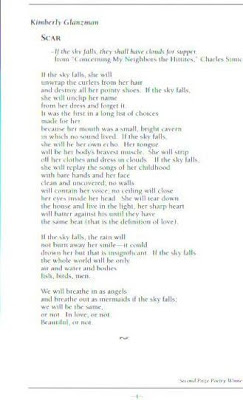 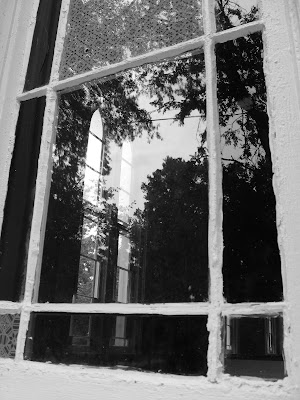 ("Gathered Light," by Sharon A. Sharp, Canon PowerShot A570 image.) 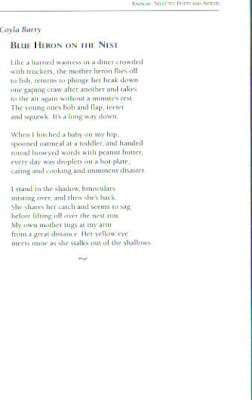 terrific collection of excerpts :)
Kimberly (Leigh) Glanzman is a good friend of mine and so glad you mentioned her here among such other wonderful company!

Hi Jessie, thanks for your thumbs up. I'm sorry the excerpts are hard to read but clicking on them makes it better. I'm glad to hear that Kimberly is a good friend.